Under the Kit Frosting

Kits promise a grimoire for electronics. Make these symbols, perform these rites, and transform yourself into someone with the understanding you desire. Fundamentally, this is a pattern I believe in, for electronics and all other craft learning. Grimoire learning demands that novices become careful observers, that they seek out and identify useful patterns & sub-patterns. I’m frustrated when features of the kits obscure the subject itself.

To be commercially viable, kits need to present an attractive picture for parents/teachers/schools. These are a distinct market that I think of “aspirational purchasers,” and they’ve always been a central target for edu-tainment material. To convince Aunt Ermeline to buy an electronics kit, it needs to present as both approachable and transformative. Since the purchaser will likely never even open the kit, functionality and component quality become very minor factors.

Successful kits promise to solve two problems for electronics novices; acquiring materials and connecting parts. Honestly, these are real bugbears. Have you spent time on digikey? Soldering irons connote dangerous and breadboards are confusing. Even a bag of through-hole LEDs can trigger Aunt Ermeline’s “chocking hazard” instincts. Aspirational purchasers, who are already imagining how this kit will transform a surly adolescent into a world-changing savant, are also primed for catastrophic “what if?” scenarios. To signify as “novice friendly,” electronics kits entomb components in custom plastic housings that snap, click, stack, in familiar toy-like ways.

This process adds costs and creates a perception of incompatibility between kits. These component wrappers can also hide the real information about a component or circuit. As the complexity of each component goes up, so does the possibility of errors and component failures that occur below the kit’s “user interface” level.

I found a stack of these electronics kits outside my classroom one morning. I assume they were unearthed from a science closet and delivered to the Makers Space instead of the recycling bin. All the Makers students who played with them remarked that they had kits “just like this, but different” in a closet at home. They’d flip to a page in the back half of the pictorial instruction book, and start to build. Ten minutes later, the comments shifted to talking about how the kits they had “were just like this, but better.” Ten minutes after that, it was “kits just like this, but those worked!”

“It doesn’t work” is a trigger phrase for me in the Makers Space, right up there with “Am I done?” So we dug in, and built a single loop from battery to switch to light bulb. Nothing.

What do you do when the rituals don’t work? In the Makers Space we could pull out a multimeter and confirm that the batteries were good. Then we could identify the one battery holder that didn’t actually connect the two AAs. We could trace through the stacks of plastic and find the parts that were touching but not connected. In short, we needed electronics knowledge from outside the kit’s domain to troubleshoot both students’ circuits and the kit’s components.

Here’s what we found. This incandescent bulb block was designed so that the wires connected to the small metal Edison thread housing, so that end users could easily replace the individual bulbs. With the bulb in place, everything about the light block looks fine. On closer inspection, you can see the loose wires and the bare solder spots on the socket.

It’s easy to see this as just a broken component, but i think that’s missing the larger problem. I draw on a mess of experience to assemble a few bits of data into the story of a broken component. But for novices, simple isn’t obvious.

After this, kids filtered out all circuits that involved the incandescent bulbs.  Then they hit this “door bell” design. 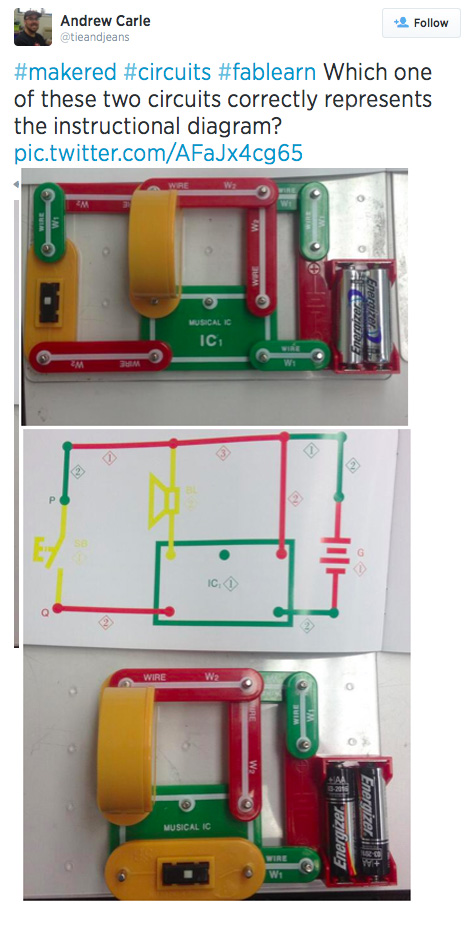 Yes, despite my best efforts to double check student work, the top circuit (which looks correct!) does not produce sound. In frustration, a student started to slap extra wires across his setup, and got sound by bridging two other pins on the music IC. In the bottom picture, this bridge is yellow pushbotton block. Now instead of prompting careful observation, the grimore was rewarding Sorcerer’s Apprentice behavior.

Frustrated, another student popped the plastic casing to investigate how those pins were connected. This is what she found.

Vanishing electronics. Hidden in the middle of an electronics kit is a tiny microcontroller, sealed under a glob of epoxy.

Better engineering can mitigate these problems., but the trade-off is fundamental to the component packaging approach adopted by electronics kits. It’s not easy to dislodge a SMD resistor from a LittleBits block, but when it happens it will create mountains of frustration with no obvious cause.

Every packed kit presents a simulacra of “real” electronics, elegant and convincing so long as you stand in the right place. Poking at the seams in several kit systems, I have a much deeper appreciation for the Minecraft’s redstone microworld. At some level, the kits will always suffer because they have to build a simplified model of electronics out of actual electricity.