One of the weird downsides of teaching at a school committed to rich #makered experiences for all students, is that I don’t spend a lot of brain cycles developing new arguments about why broad, equitable #makered is crucial. I just get to do it.

As such, fewer polemics. But more concrete, tangible, useful stuff.

Next week, grade 5 starts their biggest (in terms of dedicated classroom time) integrated design project. The design prompts violate Gary Stager’s post-it rule, but they’re pretty concise. You can check out the four prompts if you life. I’d appreciate any feedback on anything you find confusing or unclear.

Last spring we ran a giant “build a speaker” activity for grades 4-7, simultaneously. I built this little video as a intro/tutorial. As it turns out, building the hands-only camera rig was more long-term useful than the video. Many elementary kids find it easier to create their own task specific instructional videos when you remove the twin perils of showing your face and narrating your actions.

Finally, I’ve been really inspired by the work on LEGO linkages done by the Tinkering Studio, and my lovely Twitter colleagues Josh Burker, Ryan Jenkins and Amos Blanton. We cut some vertical linkage boards at the beginning of the school year, and those have been good frameworks for students testing movement ideas. 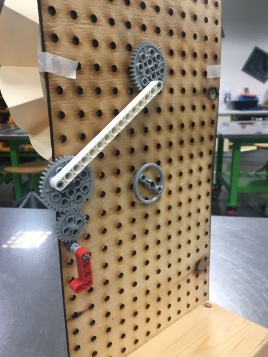 But we’ve struggled to attach motors to the vertical boards. Most of my colleagues use LEGO Power Functions motors, which are small and squat enough to attach straight through the board. Sadly, we only have a few motors and fewer battery packs. Anything that relies on PF motors will stay an experiment, not develop into classroom staple.

We do have a huge pile of NXT and EV3 motors, but they’re much heavier and awkwardly shaped. They couldn’t mount flush with the TECHNIC board, and their weight would often flex the axle. When I saw Ryan’s horizontal TECHNIC play surface, I realized it could help solve our motor conundrum.

After some iterative Illustrator, I came up with a modified TECHNCI surface that allows the robotics motors to clip in on the edges. This keeps the cabling accessible while still allowing a 40t gear to spin freely. I put the motors in the corners so that the plastic housings can also serve as the table legs.

The TECHNIC hole pattern comes from Sebastian’s work at the Tinkering Studio, tweaked a bit for the size and kerf of Chadwick’s laser cutter. If you have EV3 or NXT motors that you’d like to play with, you can grab the SVG files here. Share pictures of anything you make!