Archive for the tag “digiwrimo”

The most important thing I’ve learned in 15 years of teaching is that the calendar lies. November 12th doesn’t look that close to January 15th, but then the alarm goes off and somehow the year reads 2013 and everything falls off the rails. Or maybe I’ve just learned that concrete planning for the next terms is one productive way to deal with my November funk.

In the second semester I’ll have a new batch of 7th grade students entering the Makerspace for the first time.  One of the great scheduling idiosyncrasies of this weird class is we rolled from a spring 7th grade elective into a fall 8th grade class. While there have been some real benefits to that continuity, I’m excited about presenting an explicit Intro to Maker Culture sequence for these new students. I’ve thought at length about design thinking, read pedagogy about project designs that encourage rather than restrict student creativity. I’m a year older, and while that’s not much in fraction terms, this has been my first orbit in a Maker-Teacher mindset.

In the spirit of Gary Stager’s Good Projects and the Maker’s Grimore, here’s the first in a non-sequential run of “opening” projects for spring Makers. The content here steals extensively from the first few chapters of James Glick’s Information– which is a great book and an AMAZING audio book.

I envision this a a series of running projects, based on the fundamental historic challenge of communicating a message further and faster than a human can run. This is an attempt to motivate a constructivist playground of communication technologies, rather than trying to teach about serial protocols, morse code or semaphore. Ideally this will work like Cardboard Automata for communications protocols, where students start with the most basic materials to accomplish a relatively simple task, and then adapt as the challenge escalates.

The physical locations will drive changes to the technological solutions. For the first round we’ll stand at the end of our academic hallways, with full visibility and just out of auditory range. The next challenge will be between two non-adjacent classrooms, then from non-line of sight sections of the fields, then… who knows. Great solutions that rely on specific properties of one location will struggle in the next.

The structure of the messages will change each time as well, quietly pushing students deeper into information theory. Maybe the first week will just have a list of 5 simple and distinct phrases. One group could do really well by choosing a simple set of 5 gestures as an elementary phrase book. That technique would be difficult to implement for an arbitrary phrase from a 20 word vocabulary and more so for a message that involved arbitrary numeric values.

In each challenge, there will be some third-rail of “WHOOPS!” that designs need to avoid.  During the first week, it will be causing any disturbance to classrooms on that hallway. On others, there might be members of other groups stationed in specific positions as interceptors. Hitting the “WHOOPS!” rail doesn’t invalidate the communication, but it’s a clear way to constrain the design space.

How far could this project go? I honestly have no idea, and that accounts for much of my enthusiasm.  If the initial challenges are kept small, then at the very least it will provide students with a great opportunity to complete a design cycle. As soon as one group succeeds by emulating some historic communication system, be it talking drums or the Clacks, then I think we’ll be off to the races. I’m not looking for them to recreate the entire history of telecommunication in a few weeks, but this seems like it will provide enough concrete experience to being discussion of message density, signal vs noise, and yes serial communication protocols. Which is great, because I have a pile of nerdy ASCII jokes just waiting for an audience.

My daily challenge in our Makers group is cajoling 8th graders to face complexity honestly.

It took me a few years of teaching to realize that kids would fake “a-ha!” moments for me in class, either to force some confirmation response from me or just to end the conversation. In Makers, these are vocalized as “I know what’s wrong!” and often enacted by a grab for the soldering iron. Because when you’re actively using tools, then you don’t have to acknowledge the problems in your thinking and the flaws in your design. Just do stuff for a while, and then if it doesn’t work, you can shrug it off as a good try.  That mess of wire and PCB is just one of those “productive failures” Mr. Carle seems to love.

Except it’s not. It’s a stall and a con.

To be productive, you need to leave the “whoops!” moment with something new, some confirmation or new bit of knowledge that you lacked at the outset. When kids reach for tools out of frustration, they’re not bringing in a plan or hypothesis to test. They’re killing time, staging a performance for the class or themselves.

I want to temper the frustration and negativity that I hear in my own words but can’t seem to excise in-line. I go through that same process. I have shame/frustration built things. I ruined an Adafruit Game of Life kit one New Years Eve by smashing, and soldering, the DIP socket into place one hole off.  All I learned from that is “don’t solder after midnight on New Years.”

For the last year, I’ve focused much of maker-teacher energy on that moment after the last part is soldered into place and it doesn’t work. Let’s trace the circuit, let’s look for bad joints.  Let’s talk about how power is moving through this circuit.  Let’s look at the range of motion on this joint, let’s go back and compare this to to your original drawing. But I was focusing on the post-mortem out of my own skittishness, afraid that a corral of teacher-rules would just blunt enthusiasm.

But when the driving force behind the initial build isn’t passion or personal enthusiasm, when they’re just looking for *something* to do in the moment, then the post-mortem is too late.  They’ve been disconnected from the project throughout and haven’t paid enough attention in the build to allow for meaningful reflection.

In the weeks after MakerFaire Norfolk, I’ve pushed more on the preamble, pushed students to find a solid place from which to begin. It’s in this process, in what I sometimes fear is still arbitrary “process” requirements, that I’ve clearly seen their unwillingness to face a complex task. The call for “more MintyBoosts!” is never stronger than when the reed-switch falls off the longboard.

Maybe it’s different for other ages or working on different timescales. 50 minutes! You return to vex me yet again!

Posted in digiwrimo, Makers and tagged culture, digiwrimo, get out of the way, process, scaffolding

Discovering Where to Start

For at least a year, I’ve wanted to build a pinball machine. Specifically, I want a custom My Little Pony:FiM** pin laden with Zap-Apple pop bumpers and Pinkie Pie spinners, Derpy drop targets, and saturated with audio!

It’s an audacious goal, and for a year it’s sat proudly on the shelves of my half-bakery. I keep adding work-blogs of folk with the same crazy aspirations, but their work is inspiring rather than enabling. Seriously, check out that Ghostbusters pin!

The problem is that even with reasonably similar goals, no two people start out with the same knowledge, skills, or materials. 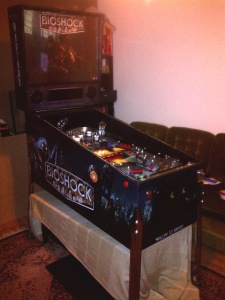 This amazing Bioshock machine stared out by building a blank cabinet. My woodworking can be described charitably as  aspirational. Starting in the woodshop would mean not starting at all.

The Ghostbusters machine is built on top of a Flash Gordon machine. Buying a distressed machine means  incurring a ton of cost and upending Annika’s playroom before I ever face my first challenge. I want this project to expand my capabilities as a maker, not as a craigslist hound.

There are many ways to the heart of a project this large and this complicated. This morning I think I finally articulated mine, one that lets me start from the unique Venn-overlap for my skills, experience and materials.  Importantly, there’s nothing standing in the way of that prototype other than my skills and my commitment. It’s an existence proof, not for Princess Celestia’s Pinball Adventure, but for my dedication to this project.

This first device won’t look anything like a pinball machine, but building it will open up a few more steps along my path towards pinball.

Selecting a starting point is a huge part of the metacognitive design process, and one that teacher-makers need to model and live with their students. Not how to build a widget, but how to find your own base camp on the approach to Mt Widget.  When you don’t know how to reach the destination, can you find the right first step to take?

I will use this picture with the slightest provocation.
The Tick is Ben Edlund’s

**I love pinball and I love ponies. I apologize for neither.